The Cast, Part I 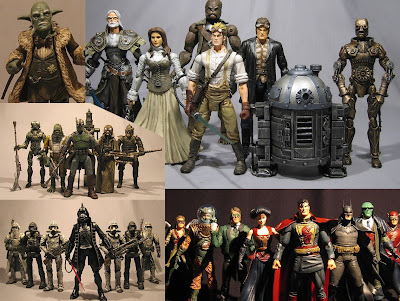 Each Monday I'd like to share a few of the characters I have created for my book. I will work my way from the more peripheral characters to the protagonist and antagonist, starting with, Grover and Tinibu:

Grover is the first friend Konrad makes on the airship Noviy Kharkov. He is a pilot, assistant mechanic, fabricator and scrounger for Wing Three.
Short in stature, but long on mouth, Grover is friendly, outgoing and quick with a joke. He has a near total disrespect for all authority except for Zylphia's. Grover has the face of a weasel and the heart of a lion. Always the first to jump into (or instigate) a brawl, he is what we might call an adrenalin junkie in modern parlance.

Tinibu and Grover are best friends, in spite of the fact that they seemingly have nothing in common. Tinibu is a dedicated family man, carefully hoarding his pay to bring home to his wife and kids in the Azores. He is African, and one of the biggest and brawniest men on the Kharkov.
Where Grover is talkative, Tinibu rarely says anything unless it is necessary. He has a calm and steady presence which soothes the irrepressible Grover.
Tinibu is the Wing mechanic, and when Konrad joins the team the second best pilot (after Zylphia).

Both men think of themselves as Zylphia's older brothers and wouldn't hesitate to protect her, if she ever needed protecting.
Posted by Mark Fenger at 1:43 PM