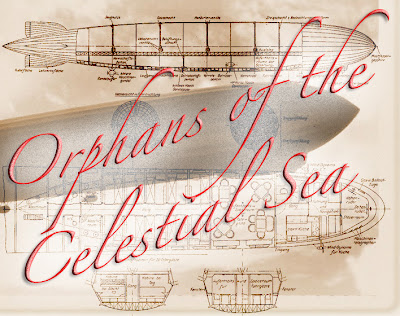 "Great opening chapter. If you can sustain this pace, you have an absolute winner... exciting and loads of momentum. I love it." - Adamx of BrassGoggle

I've worked out the kinks. Gone over it with an editor's eye, got some awesome reviews from fellow Steampunks (see above, thanks Adamx).

I think it's ready, but... I decided Mondays are the best time to update, and I don't have a big backlog of material so I'll wait.

Come back on Monday and have a peek at the first installment (and every following Monday at 12:01 AM, Pacific Time), I know you're going to love it.
Posted by Mark Fenger at 1:20 PM No comments:

[Since posting this, Orphans of the Celestial Sea has gone live. To join in the story, scroll down to the Table of Contents on the right side, or click HERE to jump to the beginning]

Ready to get to work on my new web-serial Orphans of the Celestial Sea (working title, subject to change).


I'd love to find two or three critically minded people who absolutely love reading in the Steampunk or related genres who can read 8-12 pages a week and give me feedback within a couple of days of receiving the material. If you'd be interested drop me a line in the comments below.

The series is currently titled Orphans of the Celestial Sea, although that may be subject to change. If you can imagine the TV series Firefly set in a Steampunk world that's pretty close to the mark. It follows the adventures of Tom Cain and his misfit crew as they try to unravel the mysteries surrounding their airship Hecate and the plague of psychosis-inducing Mist which is slowly destroying human civilization.

Here's the first page as a sample of what you'd be getting yourself into.

Mist crept up the hillside like a living thing, long tendrils reaching ahead as it dragged itself toward the town of Milton. It shimmered and shone like hungry moonlight as it left the refuge of the forest and entered the late-afternoon rays of sun. Tom Cain watched it in fascination until his reverie was broken by the second bell. The code was the same in every port-of-call he’d visited. Single ring for Mist spotted, second for approaching town. He turned and headed at a leisurely pace for the nearest tower. The locals had already scattered to the protective havens, but Tom had seen enough Mists to know he could outrun them if he had to. So long as they didn’t ring the third bell.


“Oi, boy! Headin’ for a tower already? What are ye, a sissy townie?” Airman Oleg appeared between a row of ramshackle wood and tin buildings followed by his mate Giles. Tom noted they were both walking as fast as him toward the tower.

Tom grinned back, Oleg was always ribbing the junior crew.


“No point in taking risks, Airman.”


“Right, right. I does owe you, doesn’t I? Well, you keep remindin’ me, and I’ll keep on ignorin’ you, and the world goes round, right laddie-buck?” He gave Tom a sharp jab in the shoulder.


An insane laugh stopped all three of them. They listened intently to the wind for a minute.


“T’weren’t nothin’,” said Giles, but his voice crept up an octave betraying his nerves.


Oleg nodded. “Yeah, ‘ey’d ring a third bell if it was Draggers.”