I'm back from a two week sailing trip. 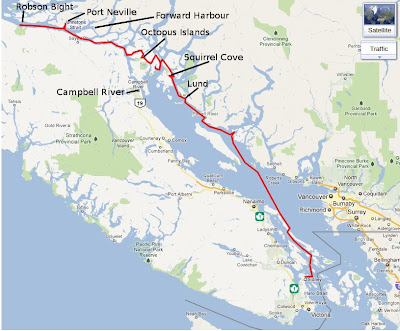 The outbound route. I picked up my wife and kids in Lund 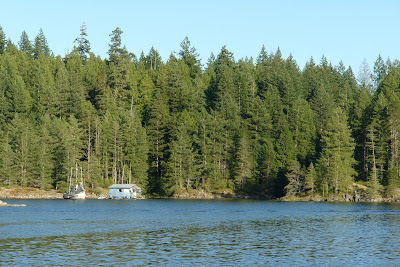 Our first stop after Lund. We spent the night in Squirrel Cove, which has a general store and small restaurant a half hour dinghy ride from the anchorage. The blue building is a floating bakery though, so we had fresh cinnamon buns the next morning. 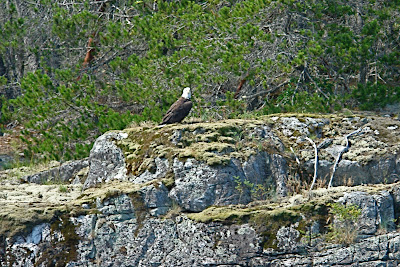 Two stops later was Octopus Islands Marine Park. I took my wife and kids for a dinghy ride around one of the islands where we saw a starfish easily a metre across, huge kelp forests, seals, an otter and this bald eagle perched on the shore. We saw so many eagles on the trip that by the end we were pretty much bored of them. I even saw one of them catch a fish within a stone's throw. 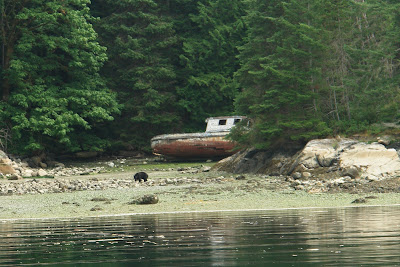 From there we sailed on generally north and west. This bear on Hardwicke Island was turning rocks on the shore over and scooping up the crabs underneath for lunch. 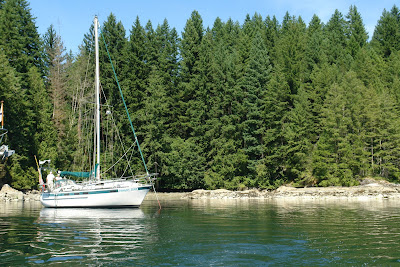 Our ride, the Dragon Star. 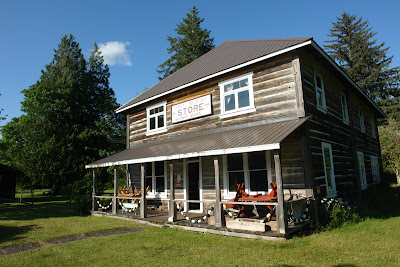 This is Port Neville's old General Store and Post Office. Once a community of several hundred, Port Neville now only has a year-round population of one. Alex the caretaker who was hired by the descendants of Neville's founders to keep the historic store in good shape. They have a cabin on the property shared among various siblings, but only used in the summer months. There were only three other boats at the government wharf and I asked Alex how much traffic he sees in the winter. He told me that last winter a coast guard cutter and a large fishing boat had anchored overnight, but neither had sent crew ashore. Otherwise the only times he saw people was when he left Port Neville for supplies.

It is a beautiful spot. We had been making our way up the Johnstone Strait to Robson Bight to see Orcas (my wife, after nine years living here had yet to see one). The transition from the islands to the strait was harsh, water temperatures dropped ten degrees (or twenty if you count in Fahrenheit) and the wind chilled by the same and blew fiercely against us (both directions!). However, once we turned the corner into Neville, the temperature the winds turned warm and it became summer again. 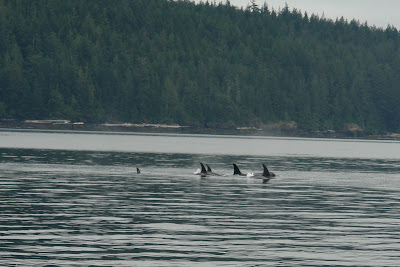 Finally some whales. Just off Robson Bight we found Orca pod A24, we stayed with the whales for about an hour as they cruised east. Two zodiacs patrolled the waters around the bight to inform tourists about the whales and how we can safely approach them without hurting them. They told us the pod consists of an adolescent male, four adult females and a two-year-old. 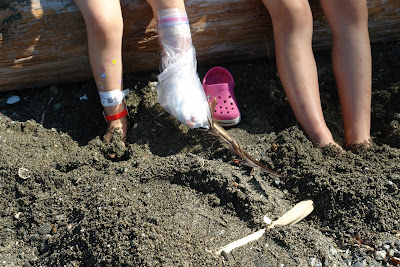 We stayed the next night in Port Neville again, then travelled to Forward harbour the next day. Preparing to anchor that afternoon, my three-year-old daughter snuck on to the upper deck (the children had been warned to stay below decks during anchoring because there was too much going on and it could be dangerous). Just as I'd started to lower the anchor I heard her crying non-stop at the top of her lungs. I knew it was serious because she's a tough girl, very little makes her cry at all so I came running to find blood all over the place and my wife tightly clasping her foot. Blood ran out and over my wife's fingers and I dashed below for the first aid kit.

Fortunately my wife is a medical professional and I have fairly extensive first-aid training from my time in the Army. We saw that she had a deep cut in the side of her small toe so we bandaged it up and reviewed our options.

The nearest hospital was at least eight hours away, and it would have meant a long cruise to a small port, then a two-hour taxi ride. We called the Coast Guard to ask if they knew any better options and they immediately dispatched the Cape Palmerton, the newest boat in the fleet from Campbell River. We sailed out to meet them, but found the main channels rough, so we loitered in a small cove. About two hours later they came alongside, my wife and daughter transferred and they took off for Campbell River.

There was no other safe anchorage nearby so we returned to Forward Harbour for the night. Cell phone coverage was intermittent, but finally my wife got through to us late that night. My daughter would be fine, she got eight stitches and had a bad reaction to a drug which caused her to stop breathing for a while, but everything had worked out okay. The two of them would stay in the hospital overnight so they could keep my daughter for observation.

The next day we started out before six in the morning. We had huge luck with currents and winds so the trip to Campbell River only took us nine hours. The pick-up went smoothly and we sailed another two hours to Rebecca Spit.

The next morning we spent some time on the beach (pictured above) and returned to Squirrel Cove so my wife and kids could have an early start from Lund the next morning.

I sailed back to drop off the boat. Mostly it was a relaxing and pleasant break. We saw hundreds of seals, dozens of bald eagles and dolphins, otters, a bear, sea lions and of course, the orcas. Makes me wish I had a boat of my own.
Posted by Mark Fenger at 2:38 PM

Email ThisBlogThis!Share to TwitterShare to FacebookShare to Pinterest
Labels: life