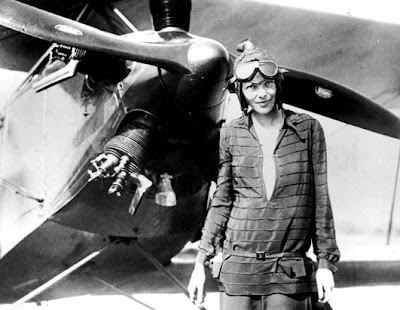 Zylphia is one of my favourite characters in Ætherstorm. She is the flight leader for wing three and the best pilot aboard the zeppelin Kharkov. She is smart, tough and has no problem keeping up with the boys. She is the only woman in the crew of the Kharkov, but she doesn't pretend to be a man in an attempt to fit in (I for one am tired of that cliché). As I was writing the story I had a picture of a woman in my head, only as I was looking at pictures for this blog-post did I realise it was Amelia Earheart (pictured above).

As this is the nineteenth century she does not have an easy time fitting in to what most people see as a man's role. The term 'sexual harassment' has not been coined, and people in that era would not even understand what it means. Being the best pilot aboard and friends with the captain are all that keeps Zylphia's life from turning into a misogynistic nightmare. Even so she has to occasionally put a man in line, using extreme measures if necessary.

Since she was twelve, she has known nothing but living in the streets and living on the Kharkov. In spite of the downsides she much prefers the Kharkov and wouldn't know what to do with herself if she couldn't fly every day.

Zylphia is, of course, the love interest. She keeps Konrad on his toes, especially in the early stages of their relationship. If I were to write a prequel novel about any character in Ætherstorm it would be her, as she has the most interesting (and developed) back story.
Posted by Mark Fenger at 3:14 PM