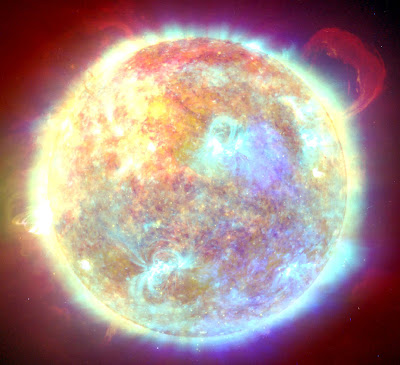 When I started writing my current book I hadn't planned on mentioning aether. When I started to get into the physics of how things work, or, wouldn't work work, for my story without some bending of the rules of physics, I realized I needed a pseudo-scientific explanation. Naturally aether fit the bill.

Rather than explain it twice I will simply steal some of Doctor Carson's lecture on the subject of aether from my book. Please keep in mind this is first draft material.

"Aether is...it is the stuff between time. That is to say, the Universe travels through time. It is constantly moving through time, like a fish in the ocean. In front, and behind the fish is water, but in front and behind the Universe is aether. The ancient Greeks were the first to hypothesize the existence of aether but the first proof of its existence was only given in the mid fifteenth century. It took so long to find because, naturally we can only observe things in our own time, and aether is every time and everywhere but where we can observe. A group of alchemists in 1456 found that when a person died there was a creative force unleashed into our world. The hypothesis was that, as the soul left our sphere of existence it slipped through to the aether all around us, as it did there was a small rift which allowed a burst of aether into our time. At first all these alchemists could do with the energy was create a small burst of light and heat, which lasted for less than a second, but over time as understanding grew properly trained people began to channel that creative force more effectively.
"The most popular theory around the turn of the nineteenth century was that aether was the tool by which God created the universe. We had learned to use it to create grand machines, harder metals, doctors could use aether to heal the sick and some were even using it to create new breeds of animals and plants."
Posted by Mark Fenger at 8:15 PM

Aether: love it. There's a small ebook company here in Australia called aetherbooks, and I love that name.

"The ancient Greeks were the first to hypothesize the existence of aether but the first proof of it's existence was only given in the mid fifteenth century."

The apostrophe on that "it's" hurts my eyes. It was probably just a random typo, but if not then here's a post that deals with correct apostrophes (interspersed with pretty pretty steampunk pics): http://twittertales.wordpress.com/2010/10/28/how-to-talk-english-like-more-gooder/

Ahh, you caught me! That is one bad habit I just cannot seem to break. Normally misplaced apostrophes bug the hell out of me too.

Good thing it's only a first draft.