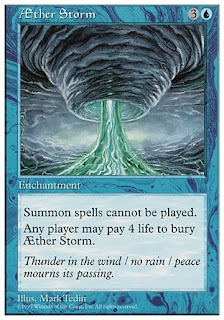 I have decided my novel will be named Aetherstorm, at least until I find something I like more. While finishing the final chapters this week I have also been refining my query letter. For those who don't know a query is an essential part of the process to getting published, the body should look something like the back cover of a published novel. Here is the body of the query for Aetherstorm.

Eighteen-year-old Konrad Adler has never set foot on Earth. On most of the planet, aether-warped animals and a dangerous sub-species of human called synari reign. Ordinary men live in the skies, safe from the dangers below, destroying the aether-warped branches of humanity at every opportunity. Konrad appears to be an ordinary human, but in truth he is like the synari, aether-warped, faster and stronger than humans.

When Lord Dragomir discovers his secret, Konrad flees by stowing away on his father's salvage gyrocopter. But the salvage operation goes wrong. The gyro crashes, killing his father and leaving Konrad stranded, hunted by both Dragomir and the synari. He will need to survive on a planet no longer fit for human life, make his way back to his home in the skies and confront Dragomir before he can truly be free.

But Dragomir has bigger plans. The flow of aether on Earth is too weak for him. He would rip a hole in the fabric of space, threatening every life on or above Earth, to create an aetherstorm.

Let me know what you think!
Posted by Mark Fenger at 7:12 PM

GREAT title, and the plot sounds excellent too. You've given a sense of the world and the stakes very well.

Thanks. I am really happy about how quickly this query came together. It took weeks to get it feeling half-decent for my previous novel and this one only took me two days. Hopefully that is a good sign, I have always believed it is easier to create a good query if the manuscript is right.

I know the feeling. The sample from the next blog entry sounds good too - a nice moment.