This is my first 200 words for Blogger extrordinaire Daena Barnhart. I only found out her page through this contest, but I'll certainly be visiting her often in the future. 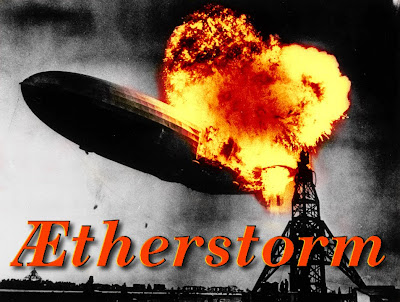 Konrad Adler wormed his lanky frame up the steam conduit, and tried to ignore the burning in his shoulders. The duct had been shut down for maintenance moments earlier and the heat was enough to suck the air straight out of his lungs. In five minutes it would be cool enough for the cleaning crew; he had that much time to sneak into Otto Dragomir's laboratory, steal a couple of vials and escape.

Sweat ran in a steady stream down his face, heat and nerves drew moisture from him like a wrung sponge. Normally Konrad avoided anything that whiffed of criminal enterprise, he picked through refuse to sell, or ran errands for half-pennies to help his father out. That would not cover it this time though, they needed some serious coin, or he and his father would be finished.

He squirmed past the sixth access hatch. The brass wheel that opened the seventh hatch, the one leading to Dragomir's laboratory, was just a floor above. Another minute of squirming through the thick, oily air brought him abreast of his destination. Konrad reached out to turn the wheel, but the metal seared his hands. He choked back a gasp of pain and rolled his sleeves over his hands to try again.
Posted by Mark Fenger at 12:35 PM

I liked this, but I didn't really engage with the character. There was no internal dialogue or character voice. I felt like an outsider, looking an at a scene rather than being in the moment with Konrad.

Maybe rather than telling us he usually ran errands and picked through garbage, have him thinking about that, deciding maybe he'd rather be doing something safe like that than trying to steal something.

I'd like to see a more emotional reaction to the situation since it reads rather cold.

I love how your first graph pulls me in with voice and suspense; I already like your character and want to know more about him and what's going to happen next. And you just keep this going for readers beautifully. To me, it's sometimes easy to make a fantasy book feel too light. Does steampunk, which I'm not very familiar with, focus on stronger descriptions and situations? Bottom line: You're an incredible writer who has more than compelled me to turn the page. The only suggestion I have would be to watch your commas.

I think this is a great beginning. It's active and peaks my interest. I'm not sure I like the punctuation in this sentence:

Normally Konrad avoided anything that whiffed of criminal enterprise, he picked through refuse to sell, or ran errands for half-pennies to help his father out.

If I understand the meaning correctly, it would be better with a semi-colon after enterprise.

P.S. I've left a reply to your comment on Bird's-eye View, http://michellefayard.blogspot.com/2011/07/blogfest-first-200-words-contest.html.

Thanks for the comments all!

@Michelle Steampunk is essentially a revival of the science fiction of the Victorian era, Jules Verne, H.G. Wells etc. I chose to write in the genre largely because there is so much new ground to create and explore. I'm not certain that other writers focus on stronger descriptions and situations, but I find it's easier for me to create a more vibrant world because I feel like I'm treading into uncharted territory. In fact I intentionally avoided reading other steampunk work until I'd finished my novel so I wouldn't be unduly influenced. Most of my knowledge of the genre came from blogs and the first five issues of Girl Genius comics which I read many years ago (GG is one of the founding seeds of the movement).

I agree with Kate, it's hard to connect with Konrad. Add more emotions and show his thoughts to have the reader connect with him more.

I've left a reply to your new comment on Bird's-eye View, http://michellefayard.blogspot.com/2011/07/blogfest-first-200-words-contest.html.

I really dig this. Great job! One tiny critique - I would change "a couple of vials" to "a couple vials" - remove that unnecessary 'of' to tighten it up.

Maybe one line of interiority to help us connect with Conrad's reason for "criminal enterprise." I do agree the other blogfesters, but you already have such strong description, I don't want to muddy up the opening or weigh it down with too much interiority.

Yes. Watch your comma splices; you've got quite a smattering. Semi-colons are easy fixes, but it's usually better to figure out why the comma splices are happening and then rework.

Nicely done but 'wrung sponge' and 'abreast'(for YA) had me pausing and you never want to take your reader out of the story. Not sure about use of semi-colons as people are suggesting. I heard from a few agent blogs that those are dead. Anyone else read that?

Bwahahahaha. This is great. You had me squarely in the scene, hell, in the conduit. I read this as adult steampunk not YA, but even if it were, I think the language is fine.

Jamie, I've heard that too. But, who really knows.

I love steampunk! I thought this was a very nice start, though I agree that I didn't quite connect with Konrad (awesome name by the way!). And I agree with Amy, it felt more like an adult than a YA.