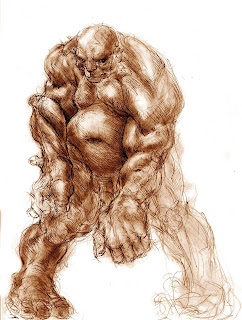 Doctor Carson is Konrad's mentor for a while. He was a member of the Brotherhood of Aether during the Great Rift. Like a hundred or so fellow brothers, Doctor Carson was caught between Paris and London during the aetherstorm which followed the rift. Unlike other people and animals caught in the aetherstorm the brothers knew how to sense and manipulate the force of aether, so naturally they tried to take advantage of the sudden surge, but for them it was like trying to wrestle a hurricane, the forces were beyond their control and warped them into hideous, malformed giants.

Doctor Carson is three metres (nine and a half feet) tall. The picture above is as close a representation to the picture I have in my head as I could find.

For nearly a hundred years he has lived as a hermit. His only pleasures in life are collecting books and hoping, one day, to have the chance to teach an eager young pupil again. The Doctor is kind, pedantic and very long winded once he starts into a scholarly lecture. He has amassed the largest library currently in existence, when humanity took to the skies they could only take a fraction of their books with them.

If he could have one wish, it would not be to fix his warped body, he has grown accustomed to the way he looks over the years, it would be to have a school full of bright young students.
Posted by Mark Fenger at 6:28 PM

So when are you going to explain the lady on the emu?

Oh you caught me!

I actually put the woman riding the ostrich there because I was tired of looking for a better pic to go with the post and it made me laugh. I wrote that on the bottom because I am an incorrigible tease and I wanted to mess with people's minds.

no prob. Now I can feel free to make up my own story about her.

Go right ahead. There are no flightless birds in my manuscript, only man-made birds.