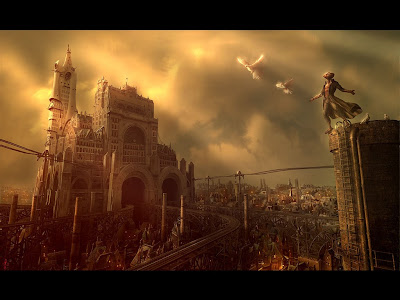 I've always preferred dark, edgy fiction. Partly it just seems more realistic to me. If you take the kinds of risks associated with nearly any Fantasy or Action/Adventure series the odds are friends are going to be badly hurt or die.

Don't get me wrong, I'm all for good triumphing over evil in the end, I just think too many authors take the easy road to that end, they coddle their characters too much. I don't think of myself as sadistic towards my characters, but I do want them to suffer, so that their eventual triumph is all the more poignant.

That is why I'm drawn to dystopian societies I suppose. That and it just seems fitting to me that Steampunk should be presented in a hard-edged fashion. After all, wasn't the Industrial Revolution one of the worst times in the history of man to be alive? Unless you were among the lucky few who owned the factories that is. If you were unlucky you could be apprenticed to a chimney sweep at age six, and if you survived the long hours of torturous climbing (often encouraged to greater speed by the master sweep literally lighting a fire under your ass), you'd most likely die in your teens or twenties from 'soot wart' an especially aggressive form of cancer caused by the coal tar they were exposed to twelve hours a day.

In other words, life was like a troll, short, brutal and ugly. Perfect for writing good fiction.

As I wait for responses from the publishers my agent has sent my manuscript to I'm contemplating writing a completely different sort of steampunk novel. The year is 1912 and the Industrial Revolution is going much better than anticipated. Already machines have grown so efficient that the work-force required to run a factory has been reduced by a factor of twenty. Men who were merely wealthy a dozen years before are now sultans of once unimaginable wealth. Hiring a few hundred men for a private security force to prevent sabotage beats keeping on thousands of vermin-ridden, ever-complaining peasants.

Enter Robert Bexley, young scion of the Bexley dynasty, proud, arrogant and lazy. He helps the wrong lady in distress and finds himself on the other side of the law for the first time in his life.
Posted by Mark Fenger at 12:57 PM